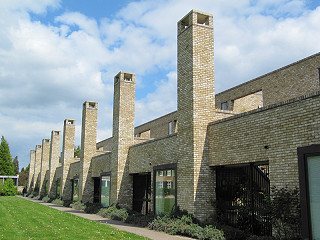 The Mystique brick slip is one of our crown jewel products. Which is why it came as no surprise to us to have it featured in an article for The Guardian. The Mystique brick slip has featured in a wide range of commercial and residential brick cladding projects across the UK. Furthermore, it was also chosen prestigious architects Fielden Clegg Bradley Studios on the Accordia Development, in Cambridge which won the acclaimed RIBA Sterling prize for best building by a British Architect.

The project referenced in The Guardian’s article is one we completed in the north west region of London in South Kilburn. The article highlights how the Mystique brick slip was the proud winner of the Stirling Prize back in 2008. A prize given for excellence in architecture and named after architect James Stirling. The Mystique brick slip was used to help brighten up a worn down South Kilburn estate in Brent. The poorest borough in West London. The Unity Place estate is now home to 235 council flats. This brick cladding was part of a regeneration project hoping to reduce crime and increase opportunities for people living in the South Kilburn area.

Described by The Guardian as a feelgood buttery brick, the Mystique exudes positive energy. It is noticeably easy on the eye. It is a predominately yellow brick which will allow it to seamlessly blend in across most areas of London. As a matter of fact, it will seamlessly blend in to most places across the country! The Mystique brick slip also features chalk white tones which couple the yellow wonderfully. These bricks have a nominal measurement of 215mm x 65mm x 20mm. Our Mystique brick slips also feature some slight imperfections on the face of the brick. Adding great character and texture to what is already an amazing product!

We carry a large stock of brick slips and brick tiles as they are also known, for delivery nationwide within 48 hours. We carry in excess of 20,000 brick slips in stock of the Mystique at any one time, to give us the capabilities to react quickly to your project requirements. For smaller projects. you may find it useful to go through our retail website  Our large yard can hold in excess of 2 million bricks, brick slip tiles, and cut and bond brick slips specials. This enables us to get in front of the most demanding schedules. And to have your finished products sat on the ground awaiting call off. We do this as we appreciate in todays current climate most schedules change weekly, so we ensure we can have the flexibility to react to any changes quickly.

Back to blog listings